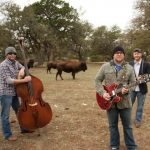 Based out of Wimberley, TX and performing since 2002 Texas Renegade has Released 5 albums and played nearly 2,000 shows from Chihuahua, Mexico to Sitka, Alaska and countless points in between. After touring extensively through 16 states and charting several singles on the Texas Music Chart the boys now consider themselves a â€œDad-bandâ€ and largely play 3-piece acoustic shows. Although Texas Renegade has scaled back a bit, they still perform their brand of country-rock on a regular basis.