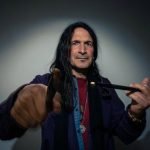 Tony has lived and performed in New York City, London, England and East Germany. Through his music he hopes to bring different perspective’s with insights and awareness to make living on this planet a little better for everyone. Come and enjoy a lovely evening with him as he performs and sings his original music as well as many classic covers in his own style.

The Fairytales “Bedtime Stories” album was written and recorded in NYC at Studio One, East 52 Street. Tony teamed up with Vince Conigliaro and Susan Rickey, together they wrote and produced 8 timeless songs with guest performances by Al Greenwood (Foreingher) and Eddie Kramer (Jimi Hendrix).

All three albums are available for purchase on line as well as at his performances. http://www.tonynatale.com